February 7, 2018
InvestmentsComments Off on A comment on recent market activity
The US share market is long overdue a decent correction. This now appears to be unfolding and may have further to go as higher inflation, a slightly more aggressive Fed and higher bond yields are factored in.

This will impact most share markets including Australian shares. However, in the absence of an aggressive 1994 style back-up in bond yields or a US recession – neither of which we expect – the pullback in shares should be limited in depth and duration to a correction (with say a 10% or so fall) and shares should have positive returns this year as a whole. However, it’s likely to be a more volatile year than last year.

2017 was unusual for US shares. While Japanese, European and Australian shares had decent corrections throughout the year of around 5 to 7%, the US share market as measured by the S&P 500 saw only very mild pullbacks of less than 3%. This was against the backdrop of a strongly rising trend thanks to very positive economic conditions and President Trump’s business friendly policies. In fact, up to its high a week ago it went a record 310 days without a 3% or greater pullback and every month last year saw a positive total return (ie capital growth plus dividends) which is also unusual. This, combined with a very strong start to this year of 7.5%, very high levels of short-term investor optimism and lots of talk of a “melt up” left the US share market overbought and highly vulnerable to a correction, which we may now be starting to see.

The past week has seen shares come under pressure as Fed rate hike expectations increased, partly reflecting an acceleration in US wages growth, and the bond yield rose sharply. From their recent high, US shares have fallen 3.9% making it the deepest pullback since a 4.8% fall prior to the November 2016 US election. It’s likely the pullback has further to go as investors adjusts to more Fed tightening than currently assumed – we see four (or possibly five) Fed rate hikes this year against market expectations for three – and higher bond yields.

This will impact most major share markets, including the Australian share market which is vulnerable given its high exposure to yield plays like real estate investment trusts and utilities. However, the pullback is likely to be just an overdue correction (with say a 10% or so fall) rather than a severe bear market – providing the rise in bond yields is not too abrupt and recession is not imminent in the US with profits continuing to rise. So the two key questions are how severe the back up in bond yields will be and whether a recession is approaching?

How severe will the back up in bond yields be?

We had a look at this issue last week in Higher global inflation and higher global bond yields. With global inflation risks rising, bond yields running well below long-term sustainable levels, bonds subject to the reversal of huge fund inflows in recent years and central bank bond buying starting to slow, the trend in bond yields is likely to be up. But notwithstanding periodic spikes, the rising trend in bond yields is likely to be gradual as historically it will take a while for inflation expectations to turn up significantly after a long downswing, the Fed is still likely to be “gradual” in raising rates and central banks outside the US remain a fair way off monetary tightening. Also, global inflation is unlikely to take off too quickly given spare capacity outside the US, technological innovation will continue to act as a drag on inflation and inflation expectations are well anchored compared to say the 1970s, 80s and 90s.

Today is very different from 1994, when US shares corrected 9% and Australian shares fell 22% as bond yields rose over 200 basis points in the US in less than a year and 400 basis points in Australia as the Fed doubled the Fed Funds rate from 3% to 6% in 12 months and the Reserve Bank of Australia (RBA) hiked the cash rate from 4.75% to 7.5% over 6 months. Thanks to higher debt levels and more constrained underlying growth, the Fed and RBA won’t be able to raise rates anywhere near like that and RBA hikes are unlikely until late this year at the earliest.

Is the US economy headed for recession?

This is a critical question as the US share market invariably sets the direction for global shares including the Australian share market and historical experience tells us that slumps in shares tend to be shallower and/or shorter when there is no US recession and deeper and longer when there is (eg, the tech wreck and the Global Financial Crisis). The next table shows US share market falls greater than 10% since the 1970s. I know the latest fall is far less than that, but I haven’t shown falls less than 10% because there are so many of them – in other words 5% or so pullbacks are a dime a dozen, ie, normal! The first column shows the period of the fall, the second shows the decline in months, the third shows the percentage decline from top to bottom, the fourth shows whether the decline was associated with a recession or not, the fifth shows the gains in the share market one year after the low and the final column shows the decline in the calendar year associated with the share market fall. Falls associated with recessions are highlighted in red. Averages are shown for the whole period and for falls associated with recession at the bottom of the table. 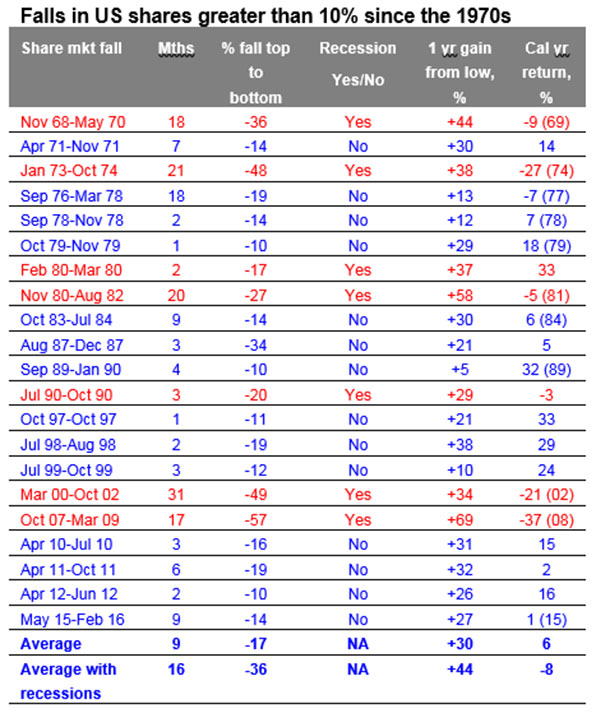 So whether a recession is imminent or not in the US is critically important in terms of whether we will see a major bear market or not. In fact, the same applies to Australian shares.

Our assessment is that recession is not imminent in the US. We will look at this in more detail in a subsequent note, but the key reasons are that:

As a result, earnings growth is likely to remain strong in the year ahead. The December quarter US earnings reporting season is coming in much stronger than expected with profits up around 14.5% year on year and revenue up 8%. And earnings growth expectations for this year have recently pushed up to 16% as tax cuts get factored in.

But what about the long-awaited pickup in US wages growth (up from around 2.5% year on year to around 2.9% so far)? Surely that must be bad for profits? Actually, the historical experience points to rising wages growth as being positive for profits as it drives stronger spending – until ofcourse it turns into an inflation problem prompting tight monetary policy – but we are still a long way from that.

So for these reasons the pullback in the direction-setting US share market should be limited in depth and duration to a correction and we remain of the view that returns from shares will be positive this year. However, it’s increasingly clear that it’s going to be a more volatile year than last year and that share market sectors that are sensitive to rising interest rates and bond yields are likely to remain relative underperformers.

There is no one size fits all approach when it comes to determining the strategy and investment mix that will suit your journey to financial freedom. So, if you want to confirm you’re making the most of your investments in 2018, click here to find out about our complimentary investment review, or contact us to book a no-obligation appointment.

Liberum Financial Pty Limited and its advisers are Authorised Representatives of Fortnum Private Wealth Ltd ABN 54 139 889 535 AFSL 357306 trading as Fortnum Financial Advisers. The information contained within this website does not consider your personal circumstances and is of a general nature only. You should not act on it without first obtaining professional financial advice specific to your circumstances. This website holds information for Australian residents only.

« Higher global inflation and higher bond yields – what’s the risk and implications for other assets?
Short term pain, long term gain – how to manage your investments like Warren Buffett »